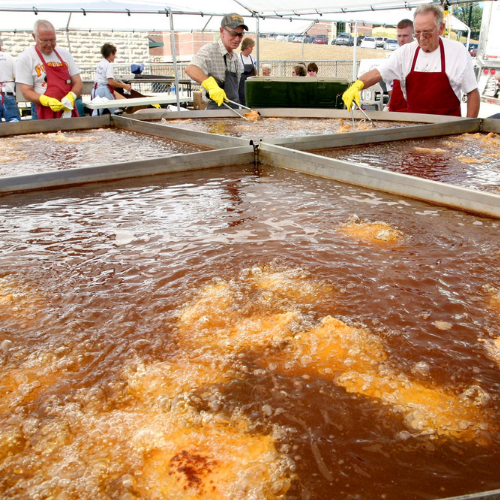 Posted at 17:05h in Attractions by Webmaster

The world’s largest known frying skillet was manufactured by London Bucket Co., Inc. in September 1991, and donated to the World Chicken Festival. The burners and firing system were manufactured by Bakery Machinery, Inc., operated by Rockwell Industries, “Rocky”.

In 1999, a new skillet was constructed, manufactured by Logan Steel and Jeff Williams Welding.

The Skillet is located at 4th /Long Street behind the Laurel County Courthouse and McKee Lodge.

Fun Facts About the Skillet

Capacity
Requires 300 gallons of cooking oil to fill. Can cook 600 quarters of chicken at one time.

Fuel
About 60 gallons of Natural gas (more than an average family would use in a year) are required to cook 7000 pieces of chicken at temperatures between 325 and 350 degrees.